State of the Farm

My previous attempt at posting this update was a very sad failure so I'm hoping to not repeat the experience.

The last weekend in July we walked in the Renton River Days Parade with Sustainable Renton. We had a grand time passing out hundreds of packets of seeds. Earlier we had hoped to staff a booth for the weekend but we simply didn't have enough people to staff the entire weekend. We sure hope to have our first booth next year! 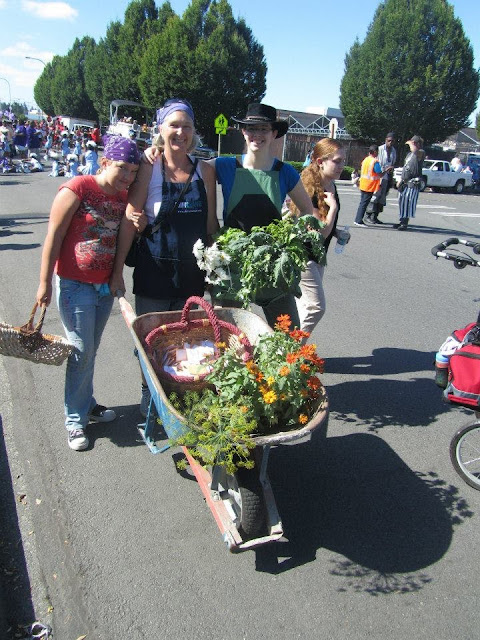 Stella, Lara, and I waiting for the parade to start. 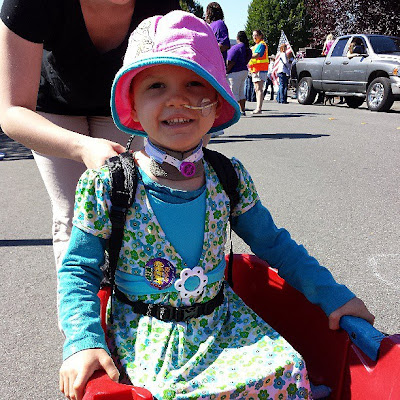 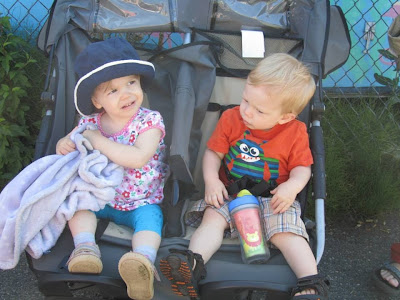 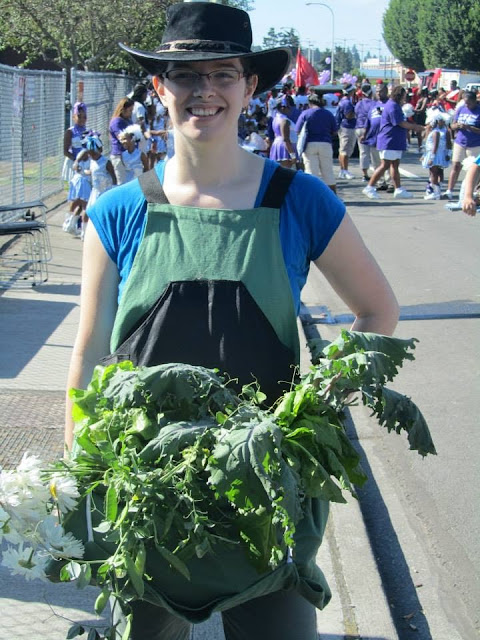 My outfit. Fresh veggies from the garden carried in the Roo, a product by my
beautiful and talented cousin!

In the garden we continue to dress the potatoes with wood chips. I've also done a second spraying of the braeburn apple tree for aphids. The most exciting thing so far is my first harvest of bulb onions: white, yellow, and Walla Walla. 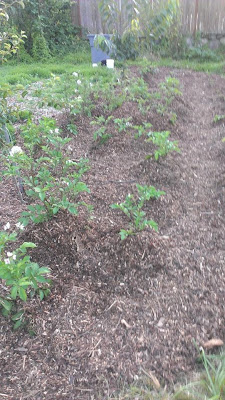 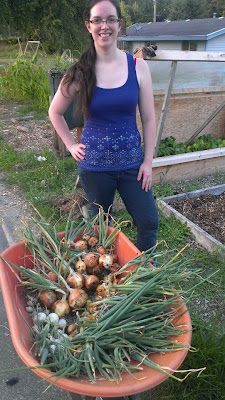 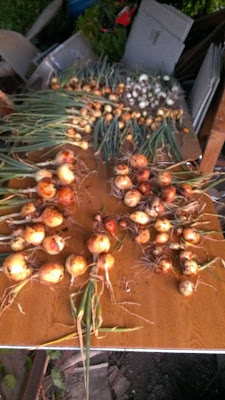 I also helped coordinate a group of high school age Japanese exchange students (and two American students) in building three garden beds for Apollo Elementary just behind the Community Farm land thanks to my friend Michelle who works for States 4H International Exchange Program. You can see a post by the Sustainable Renton president, Chris, here. Special thanks to Jim Doty who was also there the whole time and volunteered the use of his truck and several pieces of vital equipment. We built "lasagna" beds which consists of alternating layers of compost, grass clippings or straw on cardboard. Since we didn't have straw we topped the beds with wood chips. This required a heck of a lot of wheelbarrow-hauling. The poor kids were massaging their forearms and sweating up a storm by the end despite the cool weather and even periodic rain. We are ever so grateful! Can you imagine five of us at a time loading wheelbarrows and pushing them over a couple of acres at least 50 times per bed? It would take us years!

Besides the work party that day was pretty darn hectic for me. I had to get up super early, pick up greenhouse equipment from the King Conservation District warehouse in Maple Valley, drop the equipment off at my house for storage, head to the farm to harvest things for the Red House in Renton, deliver said produce, return to the farm to prep for the students, coordinate the students, then head over to my sister's house for her surprise birthday party! Phew! But also very exciting! 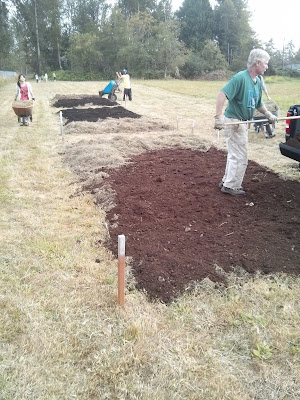 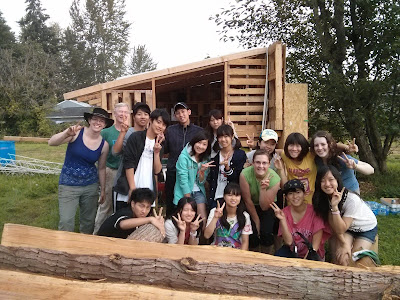 Since my last post a lot of things have happened with the goats. Chestnut and her remaining kid, Latte, are looking fantastic. Rosemary's kids are generally better though they continue to struggle with abdominal pain after the damaging effects of the infection. Rosemary, however, never did recover. In total we have lost half of the herd. Rosemary had such an advanced case, we were very close to putting her down one day, that her gut was too damaged to recover. She looked and felt better for a few days but continued to have runny poop to lose weight. Finally, despite constant treatment including hand feeding, probiotics, electrolytes, and herbal supplements she simply couldn't continue. My mom saved me the trauma of putting her down and Tim buried her. Tim wrote about it. She was very dear to me.

Next on the to-do list:
- Transplant fall crop seedlings.
- Harvest heirloom apples on my lot and make applesauce.

Also, please pray for my colleagues at work. We have six nurses on our Wound Care team covering Tacoma General, Allenmore Hospital, and an unofficial outpatient service. However, two of our colleagues are having family and health troubles which explains much of the delay since my last post. For the near future I will be working much more than usual trying to cover as much as possible for them so please understand that I won't be able to make updates as frequently as before.
Posted by Linguisticnurse at 11:33 PM No comments: 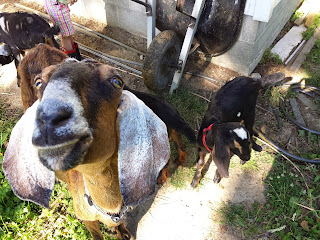 Another rough day at the farm.  Here's what I posted on my personal blog: In Hope.
-Tim
Posted by burndive at 10:57 PM 1 comment: