[This page originally published on my personal blog on May 10th, 2012.]

After years and years of expecting to develop my parent's property we finally resigned ourselves to the fact it wasn't in the works for another several years, if ever. Lots of conversations later we determined that it was in all our best interests to begin development of a long-term "homestead" on my parents' lot while our lot, good for the goats but not for much else, would be the develop-able lot should that time finally arrive.Thus, the Harris Homestead was born. [Being that only one of three families participating were named "Harris" we decided to change the name to Healthy Horizons Family Farm.]

Perhaps more of an introduction is needed. The "we" in relation to the [Family Farm] are myself and my husband, my sister and her husband, and my parents. My nuclear family lives seven blocks from my parents' property which is rented by my sister and her husband and a few of their friends while my parents are working a temporary job in Colorado. We are all passionate about healthful, sustainable, non-GMO foods and healthy living in general. I've always been the gardener of the bunch. I love being outdoors, working with my hands, getting dirty. I love the peacefulness of growing things, and let's not forget the joy of eating! Mostly I love food. Good food. Tasty, vitamin rich, filling, invigorating food! Much of that love was cultivated by my mother as we would go back and forth between home grown produce and "store bought" produce. There was simply no comparison. One of my early experiences with my mother's produce illustrates this exactly.

The first year we lived at our "new" house, the current site of the [Family Farm], my mom expanded her repertoire and grew some new crops: acorn squash and beets. Two things that I had learned to detest. They tasted like dirt. Squash was stringy and pithy. Beets, well, they just tasted like dirt. Their only redeeming quality was the novelty of everything stained red on the other end. The day mom's acorn squash hit the table everyone doctored it up like usual: slabs of butter and as much brown sugar as we could get away with. I refused to try it. I KNEW what squash tasted like, thank you very much. Watery-overripe-maggoty-apple-peat-moss-mush with a double helping of tiny shoelaces that got stuck in your teeth. Of course, mom wouldn't allow as much butter and brown sugar as I required to down the stuff so I refused. Usually pickiness was strictly forbidden but being a relatively good eater I was allowed some sympathy for my few dislikes. Suddenly everyone was exclaiming the wonders of this acorn squash, how rich, how creamy, how sweet it is! Not until both my siblings mounded second helpings on their plates would I consider putting all their teasing to rest by trying it so as to once again wax eloquent on how distasteful and unfit for human consumption is winter squash. To my surprise the small bite was smooth, buttery, and sweet. No, my mom said, that portion did not include any butter or brown sugar. My opinion was forever changed. I now know that winter squash is versatile, delicate, and filling. Organic, "home grown" squash, that is. The store bought stuff is still not food.

A similar experience was had when the garden beets first came to the table. That time I didn't hold out quite as long to try my first bite and I was even more impressed than I was with the squash. That settles it! I thought to myself. "Home grown" methods are the way to go. There is something wrong with the produce at the store.

In the 16 summers since then I have either had my own garden or managed my mother's garden for at least 12 of those years. Last year, in an attempt to increase production and lower workload we built 10 raised beds. It was moderately successful. But a few months ago my parents were somehow introduced to another method called Back to Eden Gardening. They kept raving about it until the craziness of adjusting to a second baby died down and I had a chance to sit and watch the movie. All I can say is, WOW. If this guy's methods work half as well as he claims, then I had to try it! He claims a lot of things about his garden.

All this because of wood chips. Seriously. You have to see the video. I won't attempt to describe it all here and now. (It's late, I work in the morning, I can't do a better job than him in explaining his thoughts, and this post is getting pretty long already.) You can stream it any time at www.backtoedenfilm.com. Even if you're not a Christian like he is, you can appreciate his efforts and his observations on how to improve on nature rather than fighting it. Over and over as he tells of his experiences gardening, his difficulties, questions, answers, and implementations; I was struck at how many of my own questions he answered. 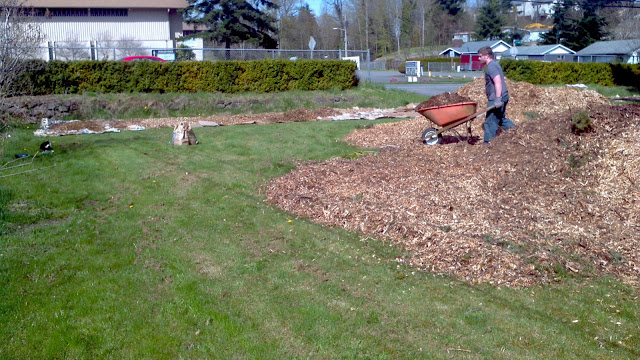 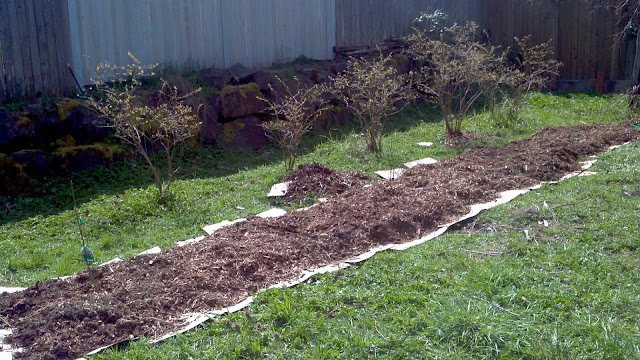 At no cost for amending or preparing the soil we have now prepped all the area we intend to use for this year's vegetables as well as a large swath of the front yard for my coveted orchard. I'm nearly giddy at the thought of having so much fresh fruit just waiting to be picked! Cherries, pears, plums, apricots, apples, and crabapples are in and budding. The blueberry and raspberry patches were amended and added to. The future wish list includes Asian plums, peach, nectarine, pie cherries, and additional species of all the above! With how much space we have for such endeavors we might even be able to host a community garden on the property in coming seasons. But first thing's first, seeing how well it really works.

What we have found so far is visibly richer soil after only a few weeks covered with the prescribed depth of wood chips, a plethora of worms, no weeds, and a dry 1/2 inch covering beautifully moist and rich chips. I must admit, it sure looks promising!

Go. See it. Tell me what you think.