Dave, my brother in law, has been experiencing some intense allergies. Like, unable to function, wheezing, puffy eyes, maybe should carry around an epi pen, allergies. By far the worst seasonal allergies I've ever seen. Apparently it's the grass going into bloom and we have enough pesky difficult-to-trim edges and corners to send Dave into melt-down mode. So mom sent out a last minute Facebook status asking for extra helpers to get all this grass under control.

Many thanks to my mom and Dave's parents who trimmed, pulled, and weed-whacked the yard into submission. My brother, Loren, did some pulling and a bit more wood chopping. Then Mom and I did a bunch of harvesting and general garden management. 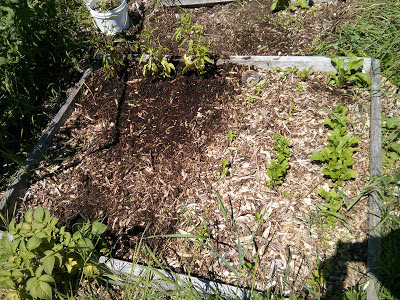 Pulled the last of the blooming broccoli. We got five full flushes out of it before it went to the goats. Top left are transplanted peppers and to the right are arugula sprouts specifically for Sustainable Renton since I have a hard time making it to the Community Garden regularly. I'll fill in the rest of the open space with more Arugula. Please notice the funny little volunteer potato bottom left. It's actually in the pathway but I hate to pull up volunteers. Seems like such a waste. Lapins cherries! I can't tell you how excited I am for cherries again! We had a beautiful Bing tree growing up with many great memories. 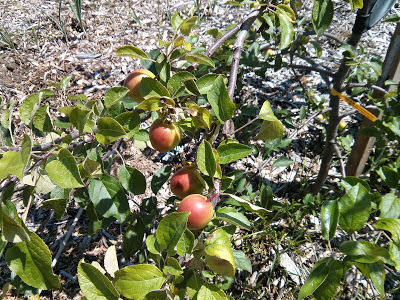 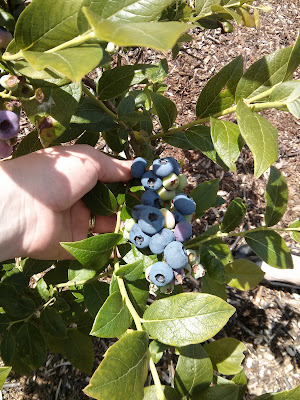 Giant blueberries! Not as much flavor as the smaller ones but we will forgive them since they are the first of the season and are oh so easy to pick. 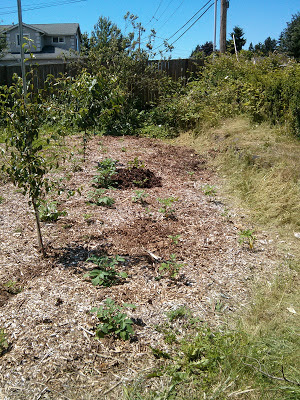 The potato field is doing nicely and due (actually, overdue) to be mounded over with more material. We are using wood chips, of course! We have intermixed red, Yukon gold, and French fingerling potatoes. 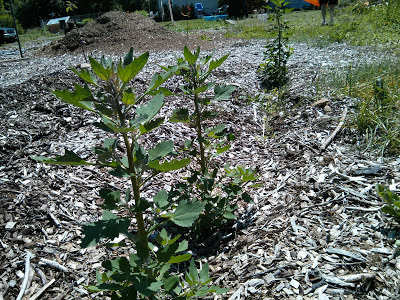 Apparently, this is what quinoa looks like. My first planting was too early so all I got were these three. Not to worry, I planted more and they are just sprouting. I'm told their leaves are good in salads, soups, and stir frys even before the heads go to seed. This is my experiment crop for the season. 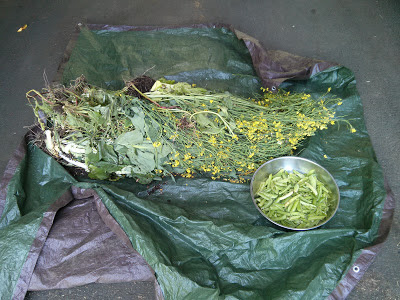 Various crops gone to seed and a bowl of pea shells for the goats. Nevermind composting; how about changing greens into milk? Magic! 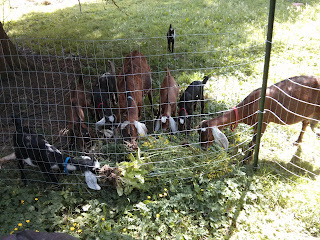 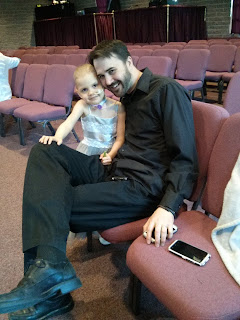 Then we went to a wedding in which our little princesses were flower girls. 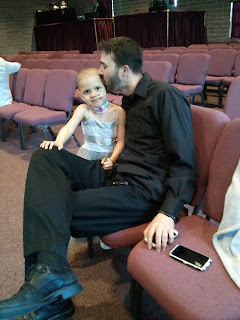 If you are ever available to swing by and help out a bit we could always use it and always appreciate it. At this point you can either take a bag of greens home with your or take an IOU for later harvest.

P.S. As if all that wasn't enough, Katherine is overdue for her second child and just might be going into active labor tonight as opposed to pre-labor for the last three weeks!
Posted by Linguisticnurse at 11:40 PM