Thanks to little to no day nurse coverage for Shoshana for the last month those who are trained to take care of her are practically zombified (making up words is fun!). Working so hard to survive day to day tasks leaves no time for blogging. Rest assured we are continuing to weed, plant, harvest, and care for the goats. Speaking of goats, one gardening filled evening Rosemary gave birth to two boys and one girl before we even knew she was in labor. 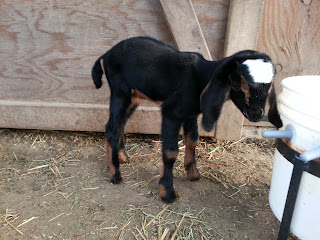 Our only girl out of six kids! She is so sweet. 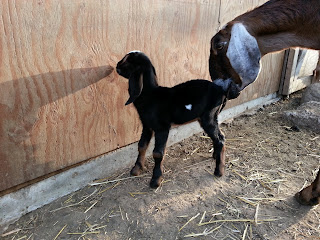 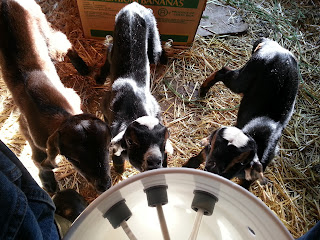 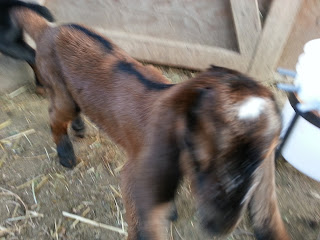 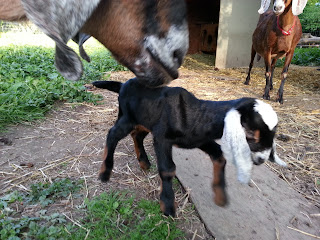 The two boys. Rosemary is so sweet! 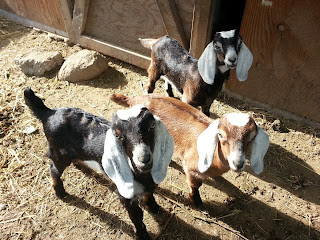 The "cousins" are constant observers.

The plan was to leave the kids with Rosemary until two to three weeks when they could go a night separated from her. In the morning we milk the overnight milk and the kids eat during the day. Unfortunately, we forgot the Rosemary has never nursed her kids since we got her from a breeder who always bottle fed their kids to encourage friendliness. A very effective training mechanism which we used two years ago but since then we have not had the time to dedicate to hand feeding the babies four or five times a day for two weeks. Maybe once our girls are big enough to do it themselves we'll restart intentionally bottle-feeding; that is how our friends managed to do it every year. After a week of dutifully teaching the kids to eat from our bottles then transitioning them to the multi-feeder bucket (pictured above) we were completely exhausted. One evening feeding just about brought Tim and I to tears since all we wanted to do was catch as much sleep as possible, usually six or seven hours. The very next day when Tim went outside to feed the kids (I had already left for work) they weren't hungry. And later in the day they weren't hungry again. In the mid-afternoon my mom went out to feed the kids and caught the sight of Rosemary finally standing still and allowing her kids to nurse. Hallelujah! Mom tells me that being so tired herself, the day before this happened she prayed "Lord, you know how to teach Rosemary to feed her kids."

Just a few days later we got word that our nursing agency was losing our last day nurse and, again, they were leaving the case without warning. That is a story in and of itself that will eventually be posted on Shoshana's blog but only that part is relevant here. My mom comforted me with the words that if the Lord could teach Rosemary to nurse her kids for the first time in her life he could get us the best nurse in the best timing.

That was two or three weeks ago and the main reason I haven't been available to blog. If you have seen me recently it has likely been without makeup, in need of a shower, and with short term memory problems.

Back to four weeks ago... we expanded the garden another step: 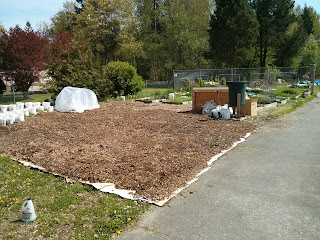 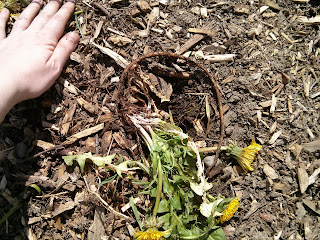 An example of how easy weeding can be (not all dandelions come up with this much root but a lot of them do). The dirt is ridiculously soft and easy to work with. I don't use gloves any more. Just a hand rake. 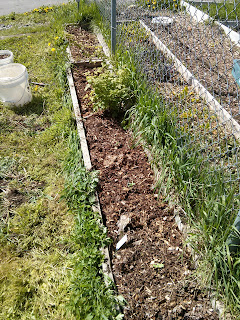 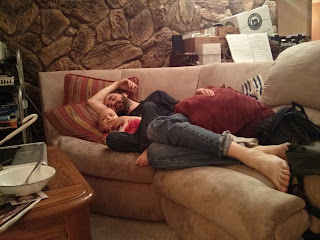 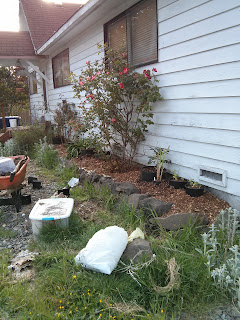 First set of tomatoes were transplanted outside in large black pots positioned against the warmest part of the house and half in and half out of the chips to maximize the sun's rays. We won't be able to plant the other tomatoes in the yard for at least a month which is about now. 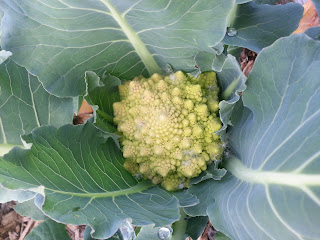 Veronica broccoli/cauliflower hybrid. One seed I won't mind buying year after year. Delicate, buttery, and oh-so-sweet. But you won't get any secondary shoots like you do with broccoli. Definitely buying a lot more seed for fall and spring.

Thanks to the yearly spring clearance sale at Raintree Nursery, my go to place for fruit trees, bushes, and vines; I bought a few more plants from my wish list that ended up overstocked and on sale: Maria's Gold Nectarine, Dave's Delight Pear, Red Boskoop Apple, Chandler Blueberry, and, for my mom on Mother's Day, Pink Lemonade Blueberry. I still have a few cherries on my wishlist but as far as the pears, apples, plums, and nectarines I think we've maximized our space with a variety of flavors and storage species.

We have also begun a partnership with a local restaurant called Red House in downtown. The owner, Gene, has been interested in our family farm since we met at a local development meeting last year. This weekend we made our first delivery of rhubarb, eggs, and samples of goat cheese and ricotta. Other deliveries will be determined by our bumper crops and whether the chef is interested in making a special out of those.

Progress is continuing with Sustainable Renton Community Farm including a similar partnership with the Red House, increased participation in the Community Gardens, and on-site education.

In the near future you can expect news on cheese, yogurt, fresh milk, additional harvests, and progress with the Community Farm. Large projects at our place still on the to do list include felling the second giant tree, rebuilding the disintegrating chicken coop, and building a greenhouse.

Phew! I think we're caught up now. Surely I've forgotten something relevant during this summary and, hopefully, I'll remember it and include it in the next post coming soon!

Posted by Linguisticnurse at 10:31 PM